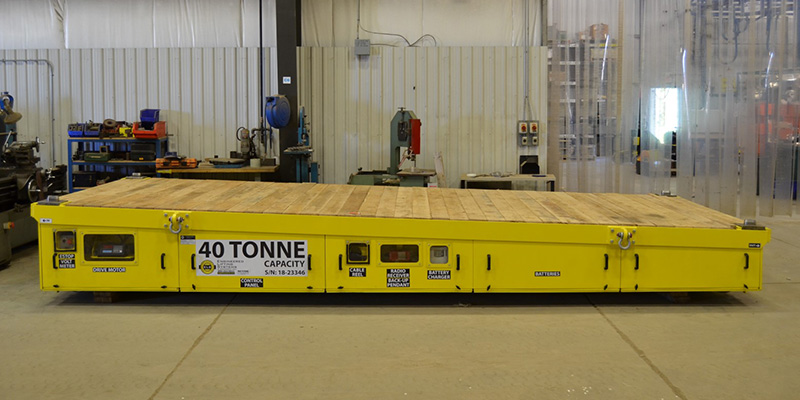 A mining refinery company needed a cart to transport ISO tanks used in a solvent extracting process for crushed rock. The liquid in the ISO tanks had to be brought in to the plant from the outside and transferred to a holding tank in the plant.
Several of the company’s Mechanical Engineers and Process Plant Maintenance Planners were interested in exploring ELS Transfer Cart products as an avenue to transfer their tanks.

After reviewing the company’s request and specifications, ELS’s Technical Sales Staff proposed a DC powered, 40 Tonne capacity, On-Rail Transfer Cart with a wooden deck sized to accommodate the tank. The cart had 4 mounting pads that matched the ISO tanks frame. To assist with draining the liquid acid, the proposed cart’s deck would have a 2° slope from front to back. The cart was to be controlled by either a hand-held tethered pendant or a remote radio. The cart was powered by rechargeable batteries and travelled on standard rails, both forward and reverse. A cable reel managed the 45 ft. power cable for the on-board 115V battery charger. The cart also had limit switches for activating controls to slow its speed and bring it to a stop consistently without hitting a hard stop. Both ends of the cart were equipped with amber flashing lights to warn when the cart is in operation (or is operating or is operational).

The company accepted the proposal, purchased the cart and found it to serve reliably in their refining process facility. Two years after the initial installation, the company wanted to better manage loading of the holding tanks so they had ELS retrofit the transfer cart with four load cells, one in each corner of the deck.

After seven years of service, the company wanted a second cart, almost identical to the first but with a reduced height profile, reversed slope and integrated load cells